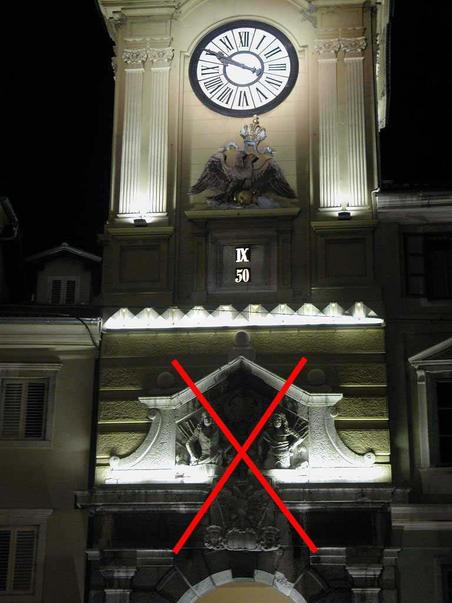 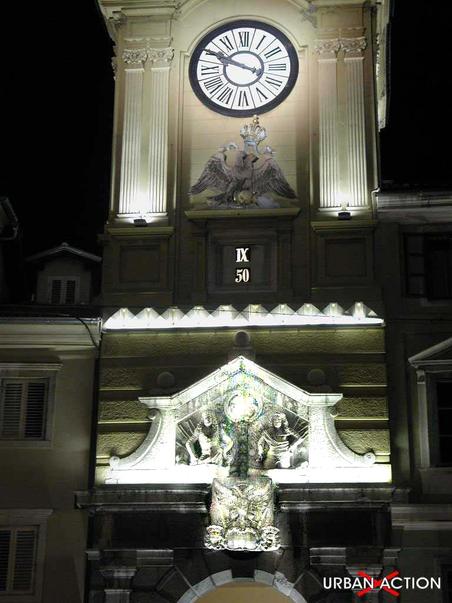 The long history of Rijeka is written on the face of the City Tower, a building that has become a real architectural and artistic symbol of the city.

The tower is an imposing building divided by a cordon cornice into three zones: ground floor with the entrance around which there is a stone cut portal frame (beyond it, one can see the Habsburg Eagle), first floor with the mounted reliefs and busts of Emperor Leopold I and Charles VI, and second floor with window openings.

The relief portraits were created at a time when Charles VI came to the throne and when the Emperor Leopold I issued Rijeka with a diploma which awards it with its own coat of arms, a double-headed eagle with two heads turned to the same side. Beneath the coat of arms, there is a motto -INDEFICIENTER, which means inexhaustible. Rijeka citizens have placed the bust of Emperor Leopold I and the Emperor Charles VI on the City Tower, in gratitude of Habsburg emperors who helped Rijeka in becoming declared a free port.

Over a long period of existence, the City Tower was repeatedly architecturally renovated and restored (1639; after an earthquake in 1750; in 1800; 1890, and recently, in 1986 when the restoration work on reliefs of the emperors was assigned toSculptorAcad. Z. Kamenar).

A worthy and noble intention was noticed during the last planning of the Tower earlier this year (2013), when a new and modern lighting was conducted; a lighting that properly emphasizes the basic architectural forms of this historic building. However, the new lighting solution has probably made ​​an inadvertent mistake, when the stone busts of the emperors and the old city coat of arms, on the first floor of the tower, remained un-illuminated.

The described stone fragments of the Tower testify to the rich history of Rijeka and must be properly illuminated and displayed on the front of the building.