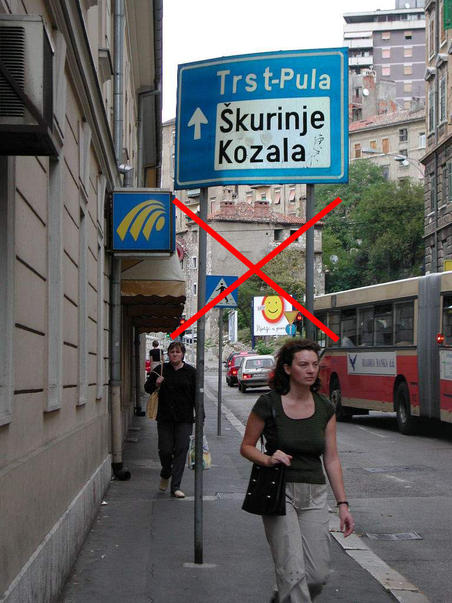 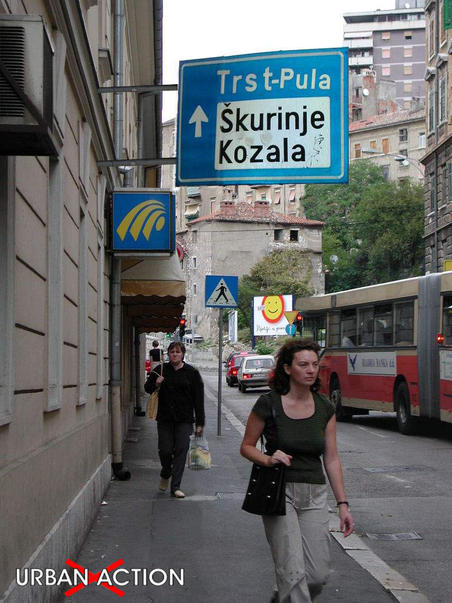 Urban planning of a city is science, technology, law and art. This sector should consist of relatively many different disciplines. However, the true and satisfactory urban solutions often cannot be without the leading role of an urban planner/architect who himself/herself came out of his/her architectural profession because editing space, including urban areas, is since the beginning, one of the main goals and objectives of his/her formation.

That, however, was not considered in placing a number of traffic signs and road signs in the centre of Rijeka; signs which are set to meet purely utilitarian, traffic demands for easier flow of vehicular traffic.

In case of an error when locating the bulky signpost (leaning on two vertical steel pipes) located at the western street sidewalk of Manzonijeva ulica (Manzoni Street), the traffic engineer and/or building municipal engineer should have realized that the traffic sign (of useful aid in proper movement of vehicles on the road surface) must not at the same time be an urban obstacle to pedestrian movement on the sidewalk.

Specifically, the roadmap can very elegantly fit into the front of the building with the use of suspension brackets perched above the sidewalk.

With this urban action we wish to emphasize that traffic or construction professionals specializing in urban space interventions must take on a special, urban way of looking at urban issues with the necessary rejection of some inherent limitations of their profession.