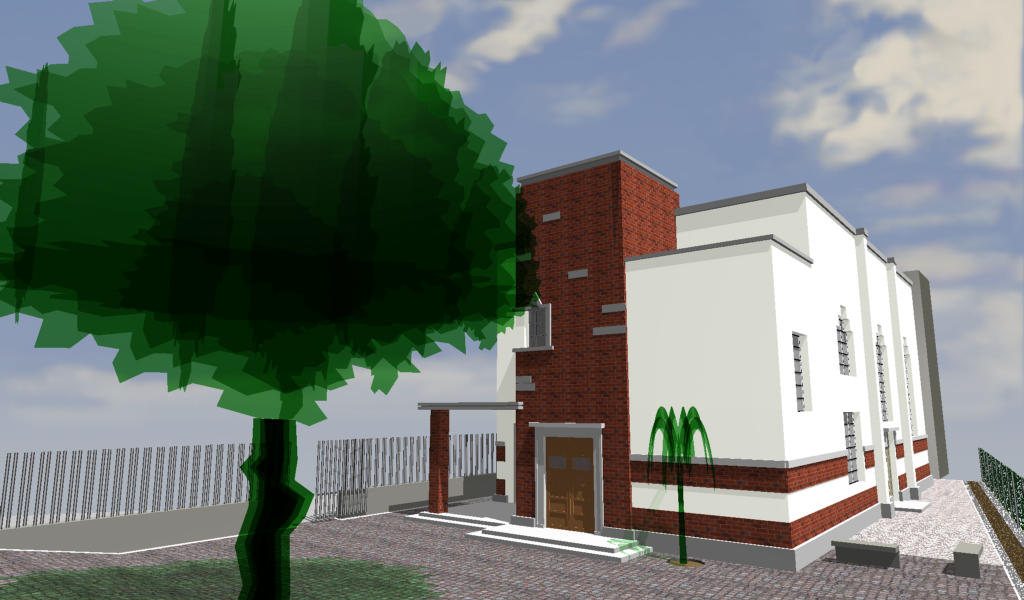 After 1903, Rijeka got its first monumental town synagogue (Greek: synagogue, Hebr.: Knesset, the original name of the council and the assembly, and after the destruction of the temple of Solomon in Jerusalem in 586 BC and the first forced displacement of Jewish people from Palestine to Babylon, a name for a Jewish place of worship). The first synagogue was done by the local architect Leopold (Lipot) Baumhorn; it was made in Moorish style with a dome already erected at the intersection of today's Ciottina ulica (Ciotta’s Street) and Pomerio, Rijeka. Unione Israelitico the Orthodox, assigned civil engineers Vittoria Gyözö Angyal and Pietro Fabbri (who have during 1925-1927 already acquired the appropriate references for the Opatija Synagogue project)to  build a new synagogue in 1930; it was located at Ulica Ivana Filipovića, representing simple architectural and decorative forms.

The building is an interesting example of modern architecture. The main body is an asymmetrical composition of the horizontal and the vertical, almost geometrically precise cuboid; the northeast and southwest facade is discreetly opened by a large, festively composed, rhythmically deposited rectangular windows with pyramidal-staircase ending. The impression of modernity is especially supported by the asymmetric cubist composition of the western front with the main,corner entrance, emphasized in the staircase corpus and angular window with forming traces of Art Deco details.

Simple, smoothly plastered volume of the prayer hall is just in front parapet zone and is signatured with the dividing line of the cornice below the windows, and the horizontal bands of contrastly colored grouted brick and stone base. Above the window, the embossed motif of a six-pointed Star of David is applied as a relief in plaster. Beside the entrance, a memorial plaque to Jews fallen in WWII was recently set with the sign of the menorah. The luxurious Baroque Aron Hakodesh is made of marble (holy closet for storing Torah) created in Conegliano Veneto; it originally stood in Trieste synagogue Scuola Grande, was later transferred to Ancona, and was from there sent to Rijeka as a  donation in 1934. Sermons stage for rabbis is in the middle of the hall, surrounded by benches, according to the orthodox bifocal concept of synagogue space. The first-floor gallery meant for women’s (Esrat Naschim) praying space is separated by a gridded gate. The only interior decorations are the strict, almost ascetic cornice painted below the ceiling and a stylized vegetable relief below the window line. The inventory of synagogue preserved the Torah rotulus with Meili (cover) of velvet and gold embroidery, silver tas rimonim, crown of Keter Torah,jada (the handfor reading the Torah), parohet and  hanging ner-Tamid (The Eternal Light). Next to the synagogue, in the western part of the plot, an extra-storey building with a caretaker's flat was provided with.

Unlike the large local synagogue that was destroyed in the war in 1944, the synagogue at Ulica Ivana Filipovića (Ivan Filipović Street) was preserved continuously until today, and is one of only three synagogue buildings in Croatia that have been spared from destruction during WWII, with their original purposes preserved until today.

Given the high monumental and architectural value of the synagogue it was decided to proceed with the integral process of its renewal. During July 2002, ​​a separate conservation study Rijeka Synagogue was made (author: mr. sc. Gordana Grčić-Petrović, Professor of Sociology and History of Art), which, in a detailed analysis of historical value and the present state of the synagogue, proposes guidelines and updates for modalities of protection to fully revalue its monumental importance.

The project of architectural renovation of the synagogue has been made with respect to professional guidelines specified in conservation studies, and recent programs of Rijeka Jewish Community for future use of the synagogue in liturgy and other social purposes. In this sense, the project predicts significant interventions into the interior of the building as well as into its immediate environment.

Based on an integrated project, the Rijeka synagogue rebuilding was started in 2002 and finished in 2008.

Other projects from the category Culture: